Xiangzhu Chen
‹ Back to Projects

A conversational health assistant embedded in a necklace wearable for active people living with asthma.

How might we help runners living with asthma exercise safely and independently?

Asthma can heavily affect their daily activities such as jogging. Accessible and in-time help is most needed for people living with asthma while they are exercising.

Sarah represents the target group we are designing for. We extracted this persona based on user research.

Mia: a conversational assistant that helps runners get help in-time

Mia's major form of existence is a conversational UI, which is embedded in a wearable necklace. However, the whole product ecosystem is more than that. Mia can be connected to the inhaler and smartphone apps to provide more features 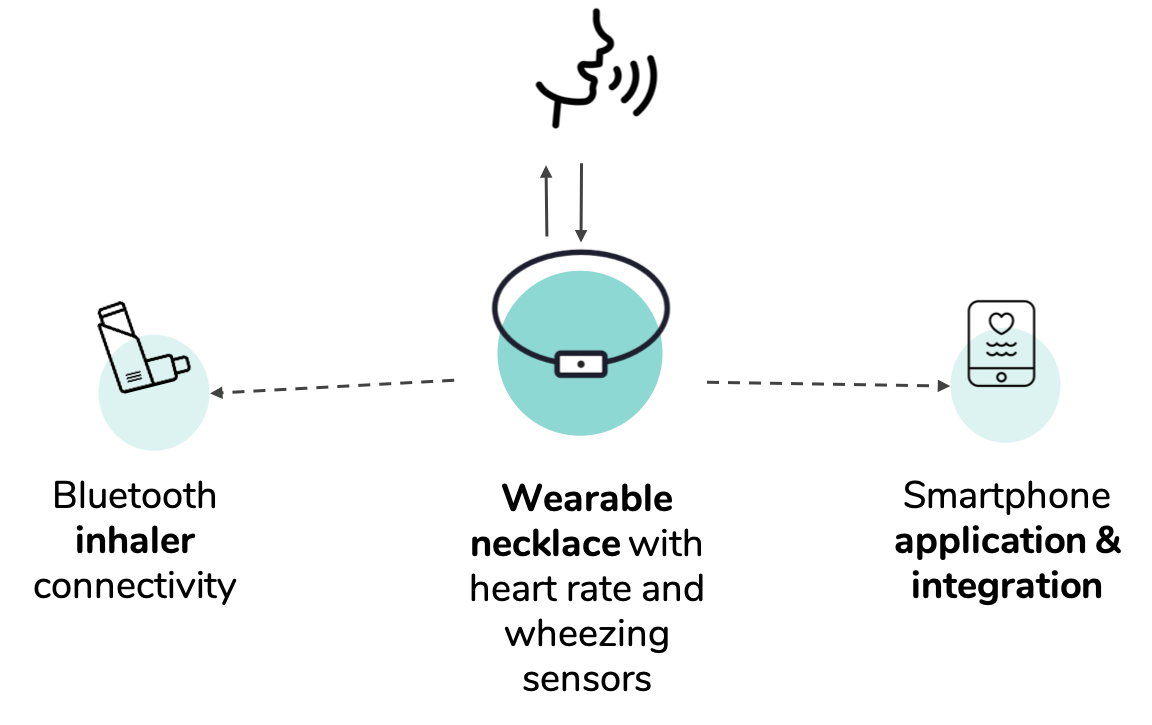 The start of the conversation between Mia and Sarah 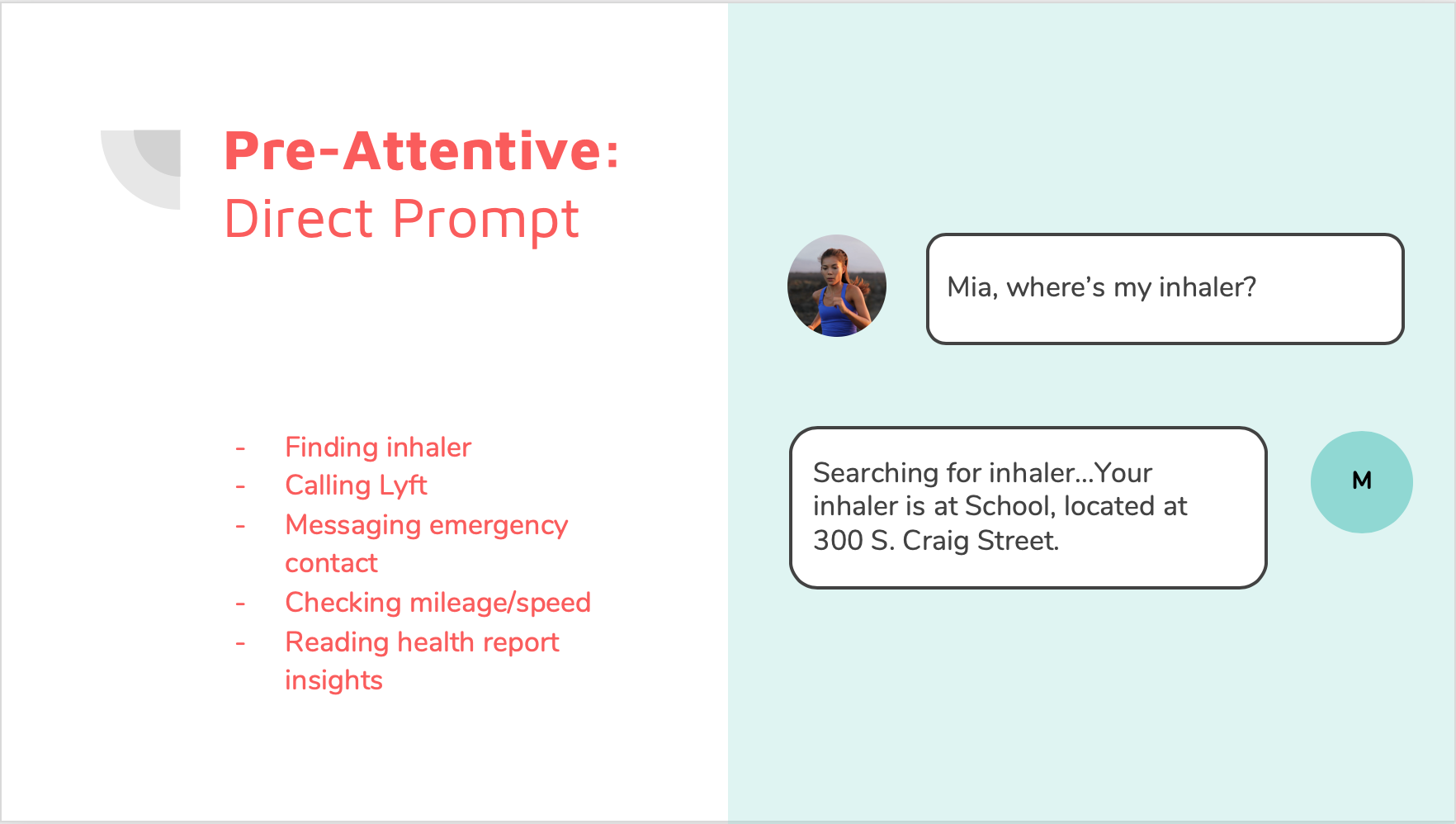 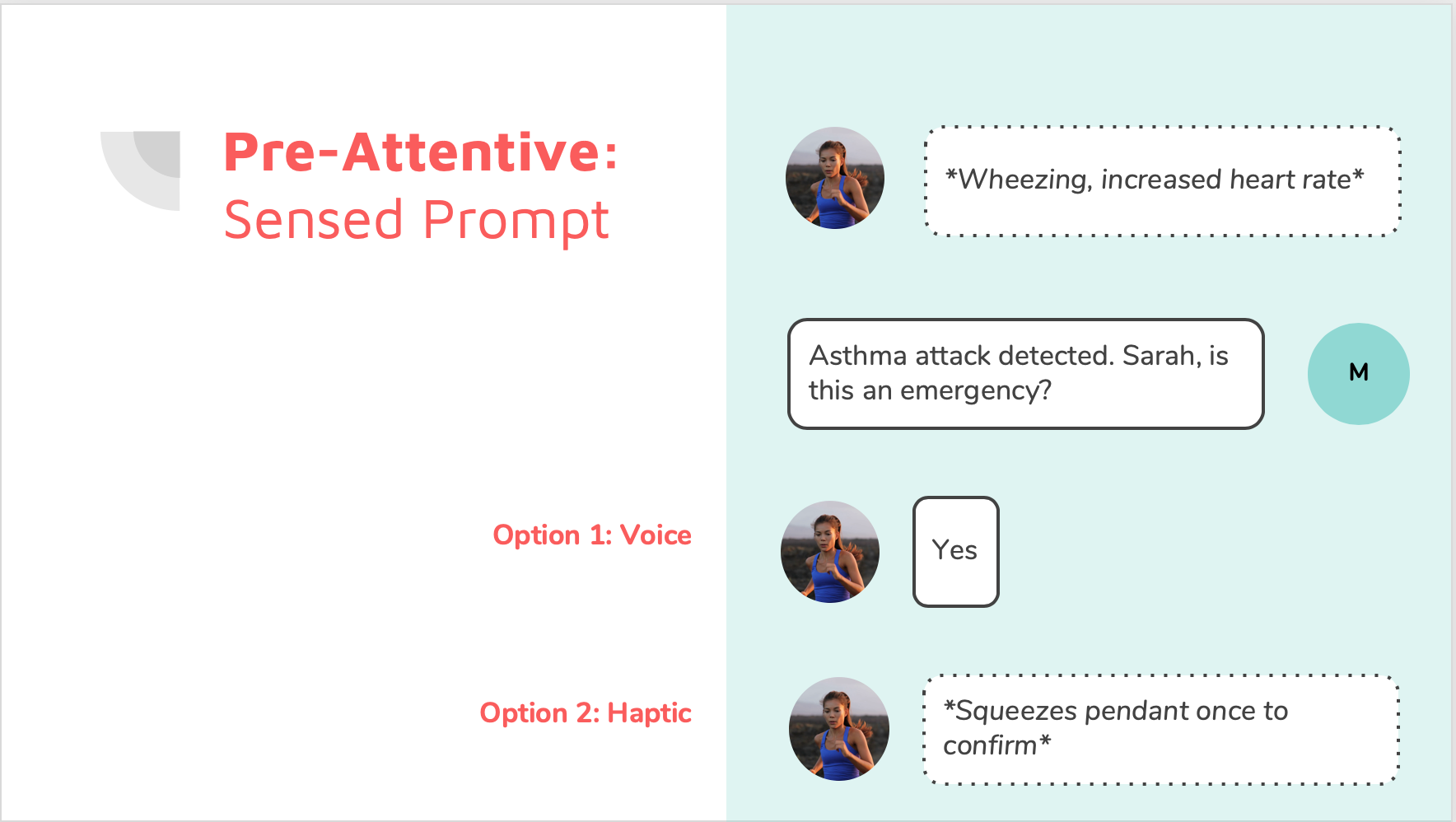 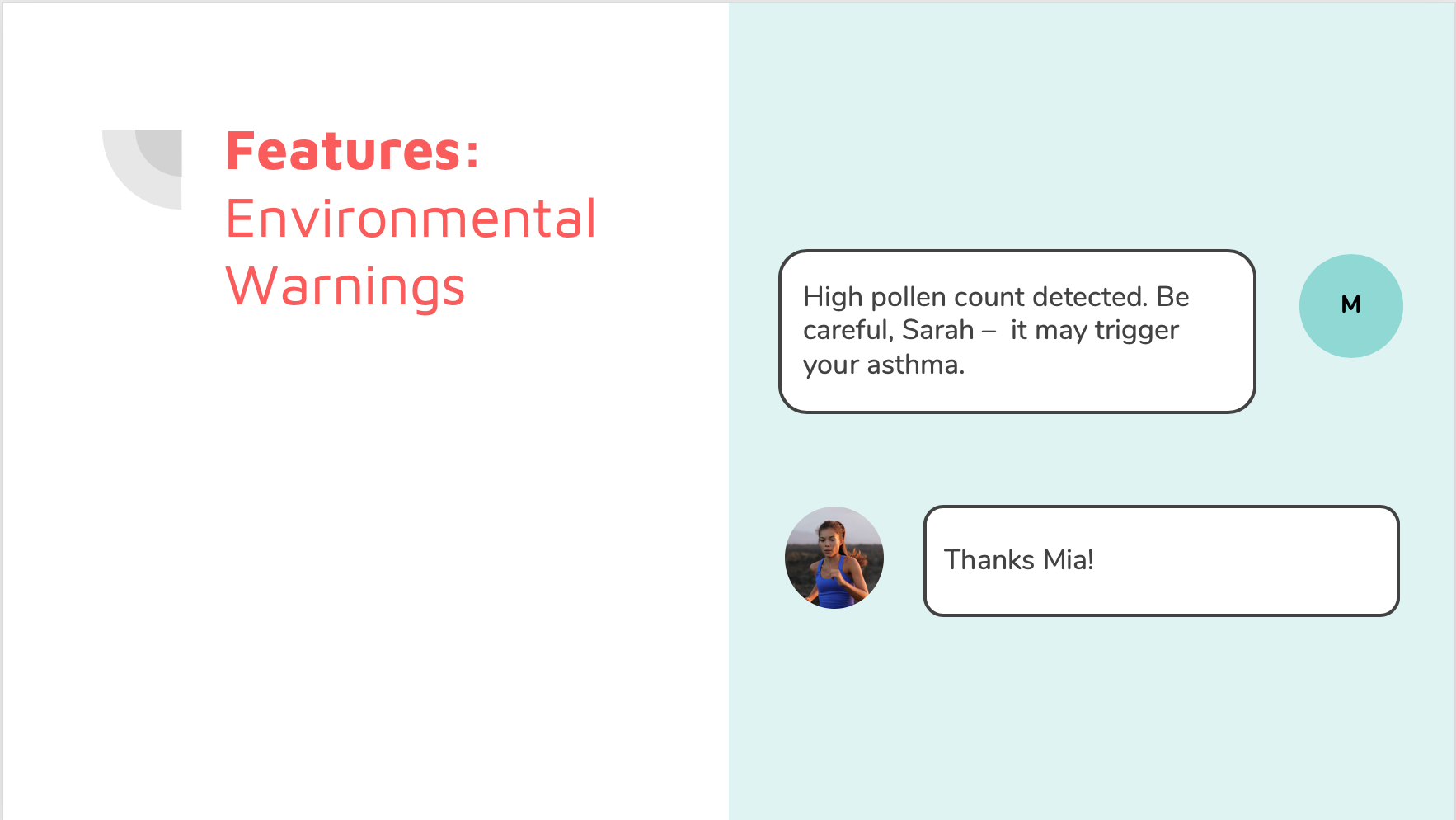 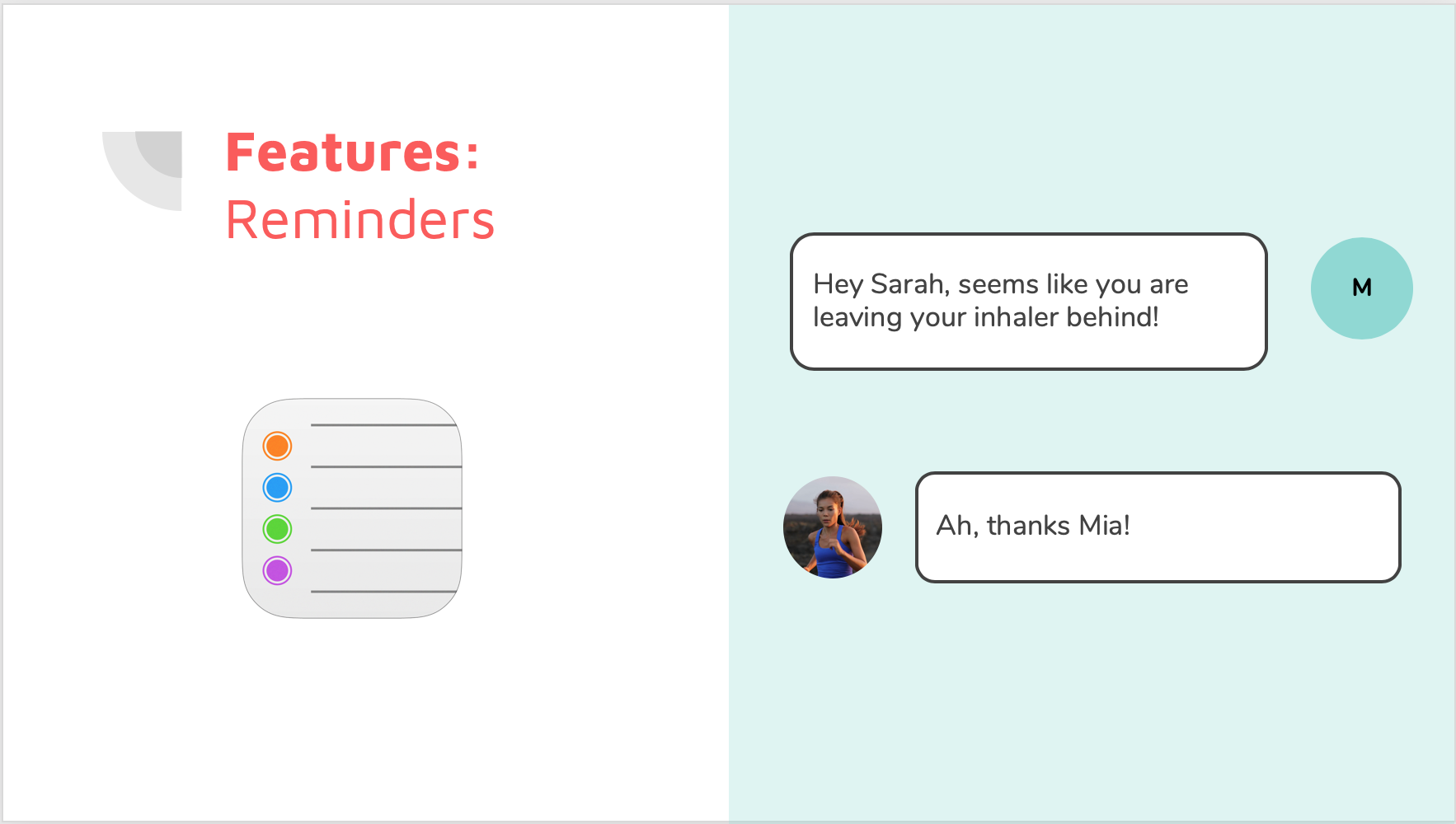 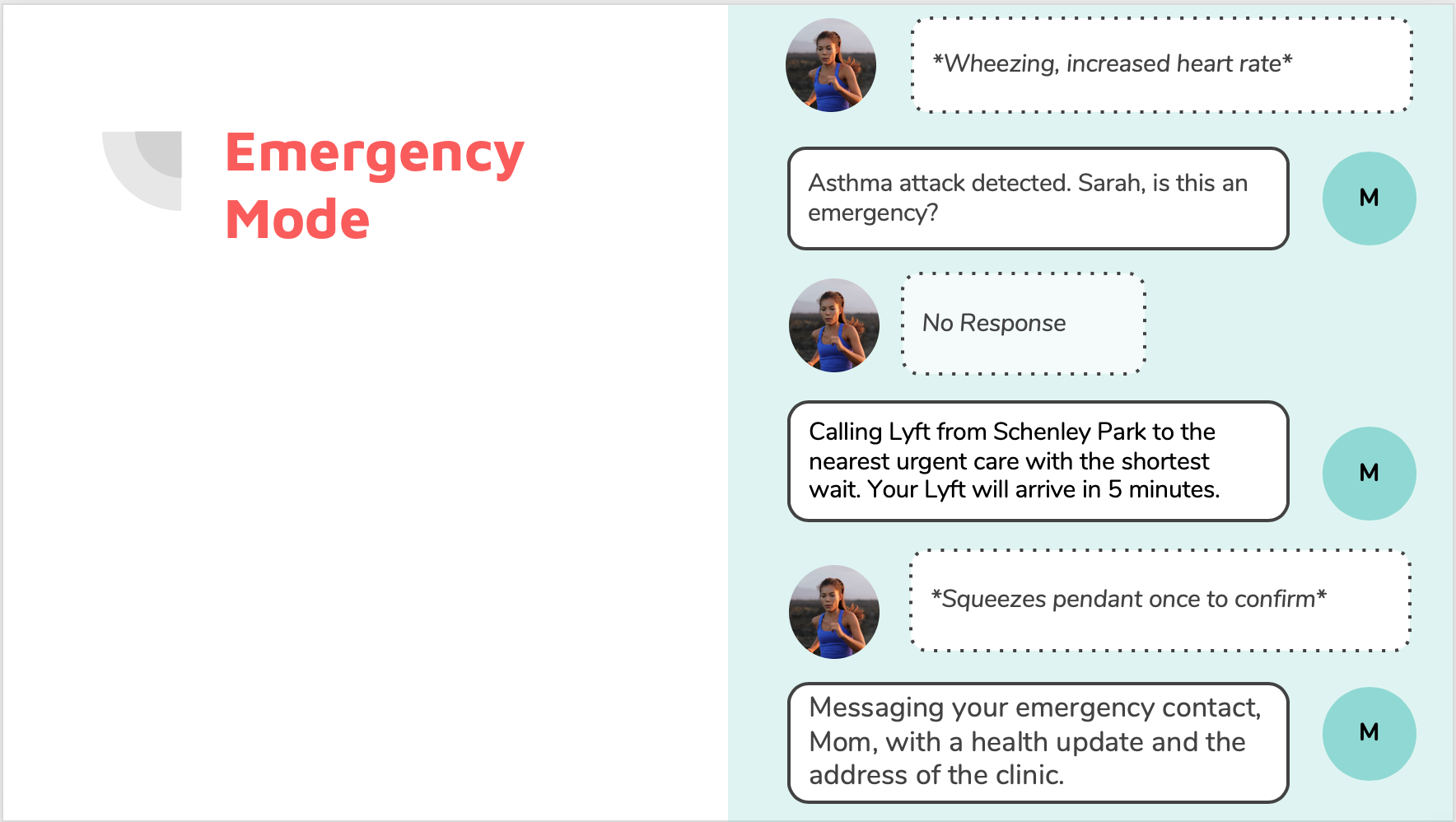 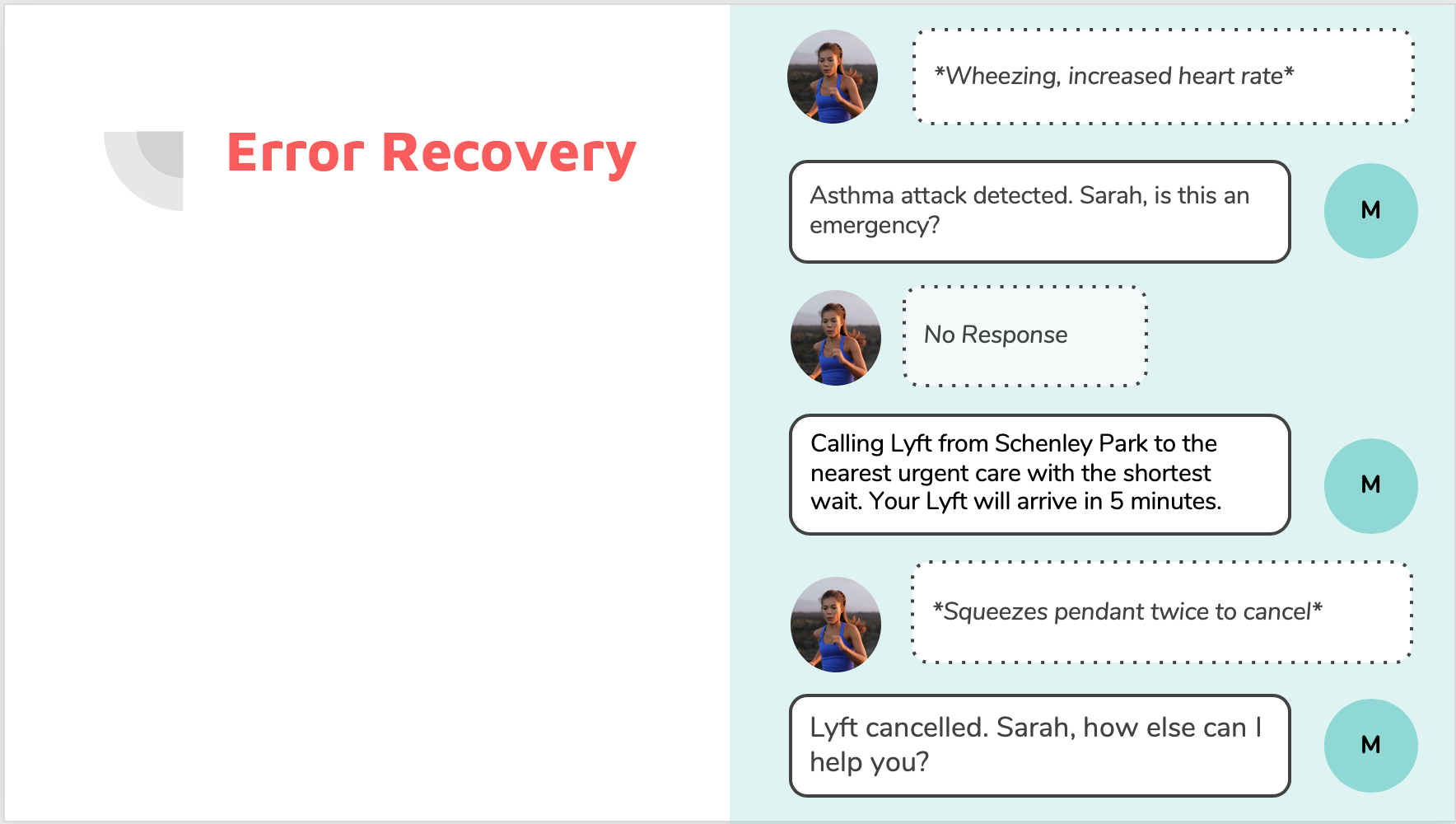 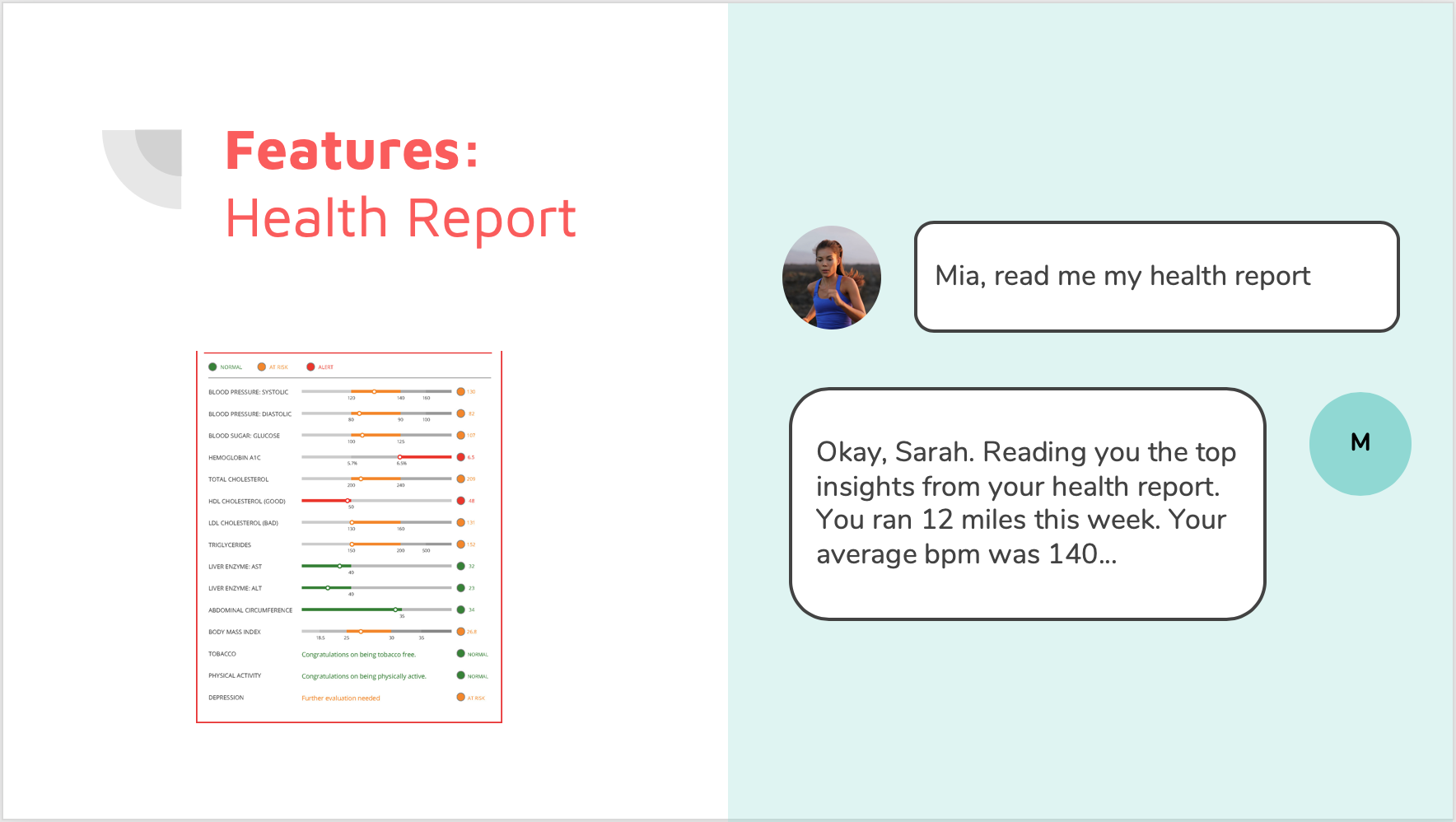 Our team was tasked to explore how conversational UI can be designed to help with emergency response situations. We selected medical domain to explore. 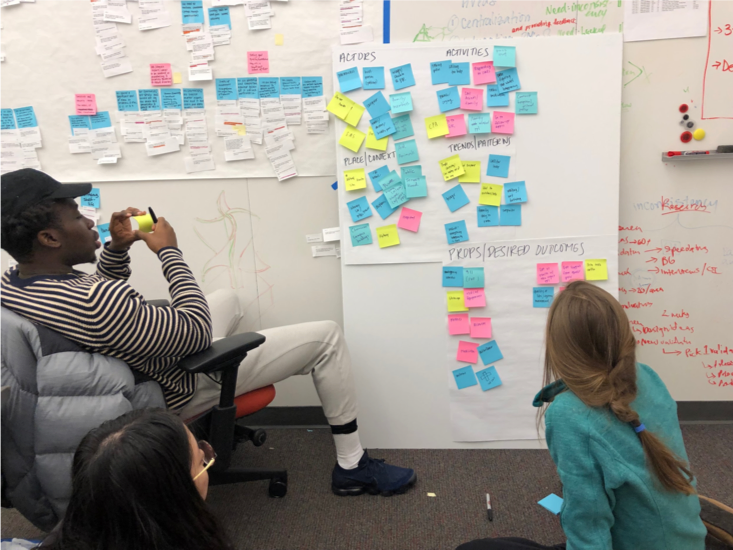 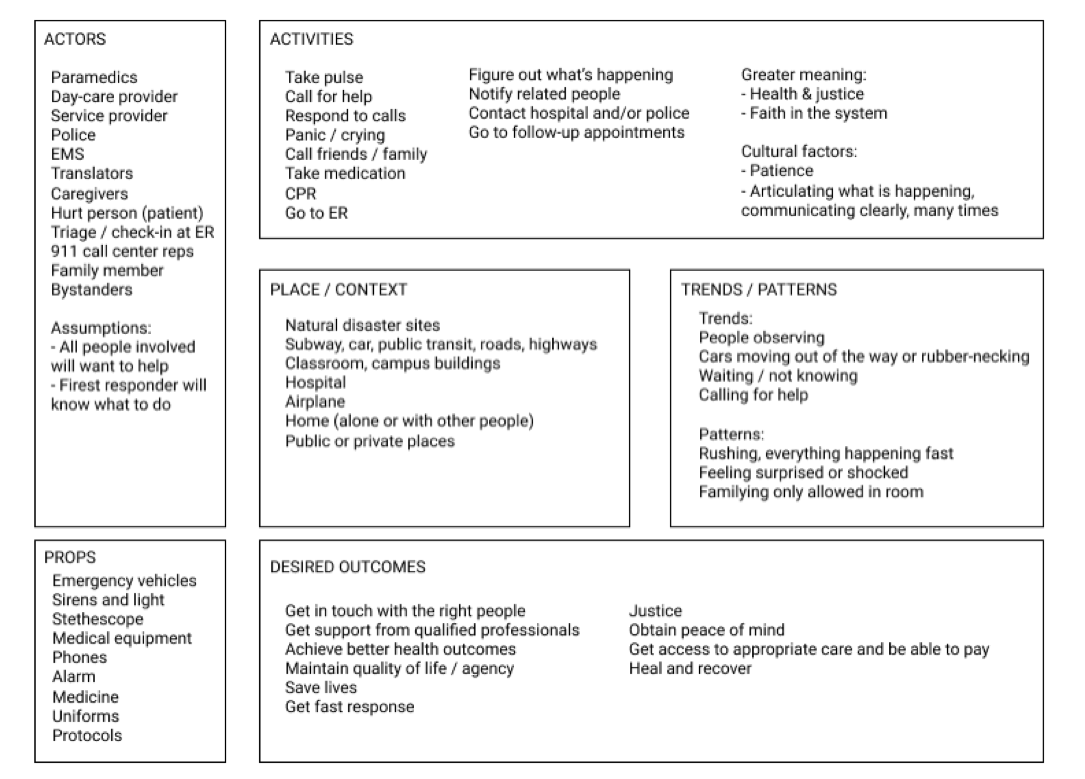 We started rapid prototyping by creating a list of possible scenarios to test the viability and benefit of the CUI. We asked three leading questions: 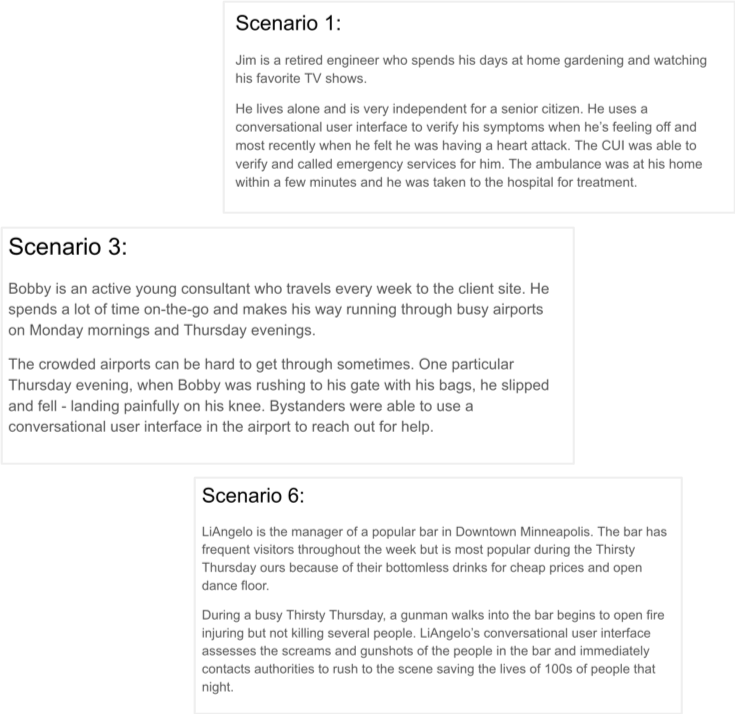 The 3 winning scenarios out of 20

The team selected one scenario to created a short script and acted out to a group of audience:

Kate loves to go trail running by herself to clear her mind. While out on a run, she trips and falls, breaking her ankle.

She uses a CUI in her smart watch to send a message to her emergency contact. She sends her location and a message about where she is located on the trail she is (by the big rock after the 2nd hill) to an emergency operator. 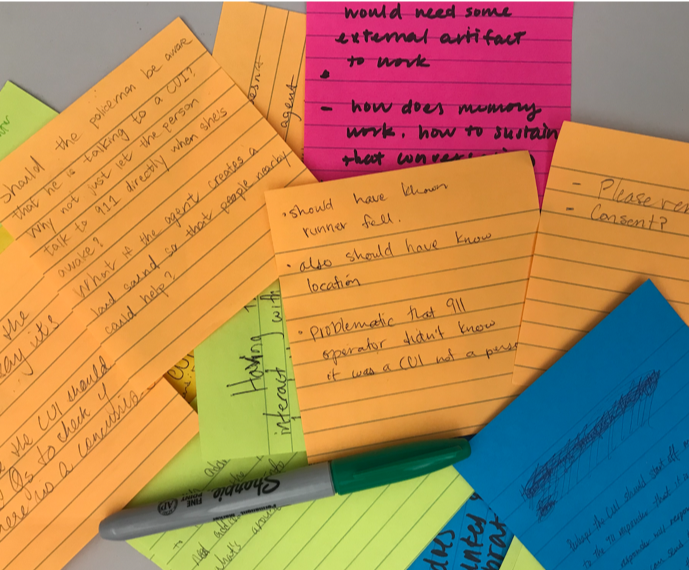 The experience prototyping revealed flaws and concerns about the scenario and script. The audience thought the CUI did not play an irreplaceable role to help the user in the scenario. Therefore, we decided to pivot by digging deeper to user's pain point, CUI's ability and the wearable's ability. This got us thinking about data privacy, the moment of intervene, and the role of CUI. 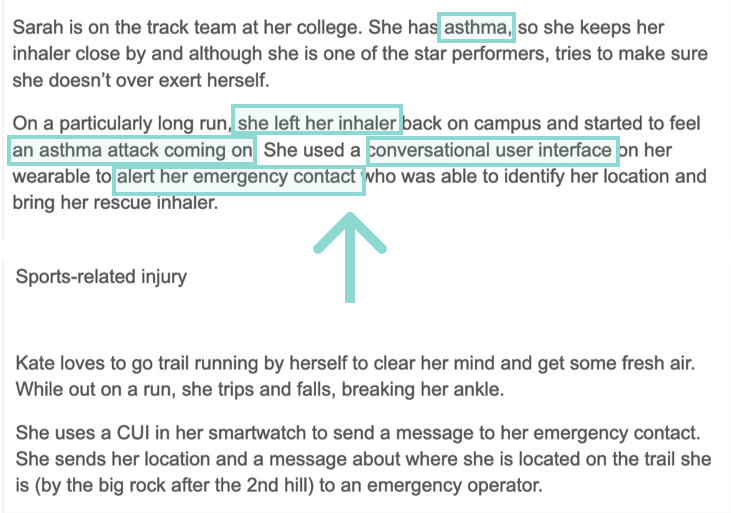 The new asthma scenario is more narrowed-down. We decided the asthma scenario had more potential where the CUI could learn about the user’s conditions and play a more meaningful role when speaking is hard. Till this point, the wearable was the smartwatch. 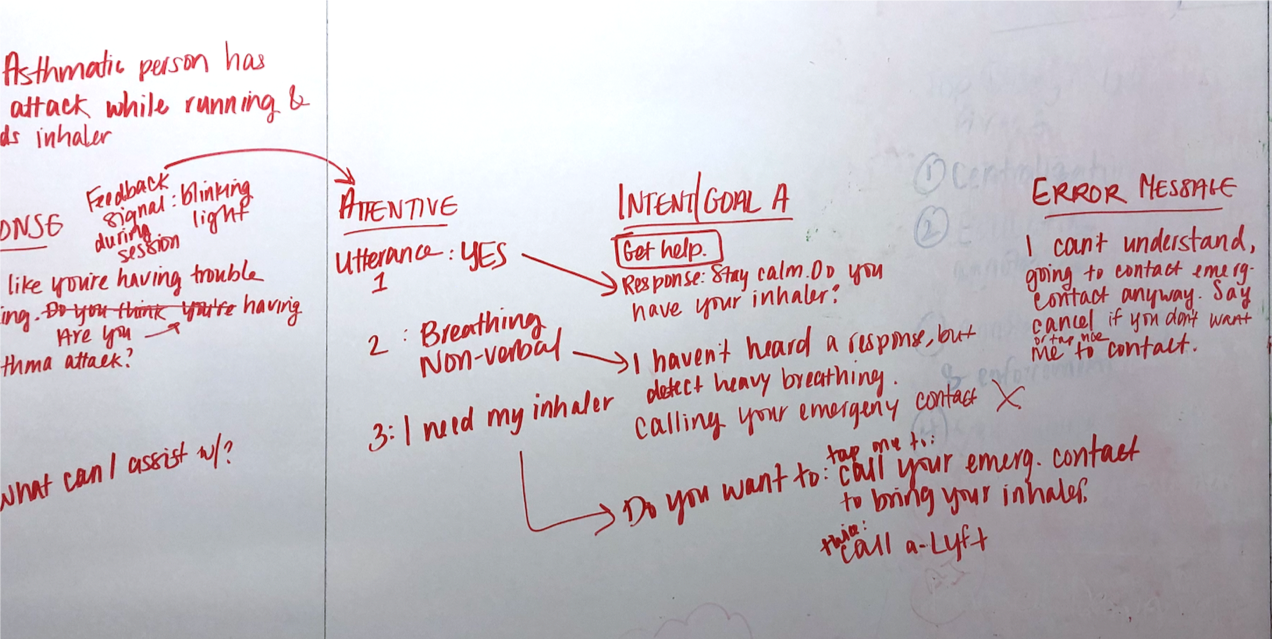 Users pain points during an asthma attack while running are:

One key designing point for CUI is the start of the conversation. With more user interviews with a runner living with asthma, we found that what's special about an asthma attack conversation is that user might not be able to speak clearly. 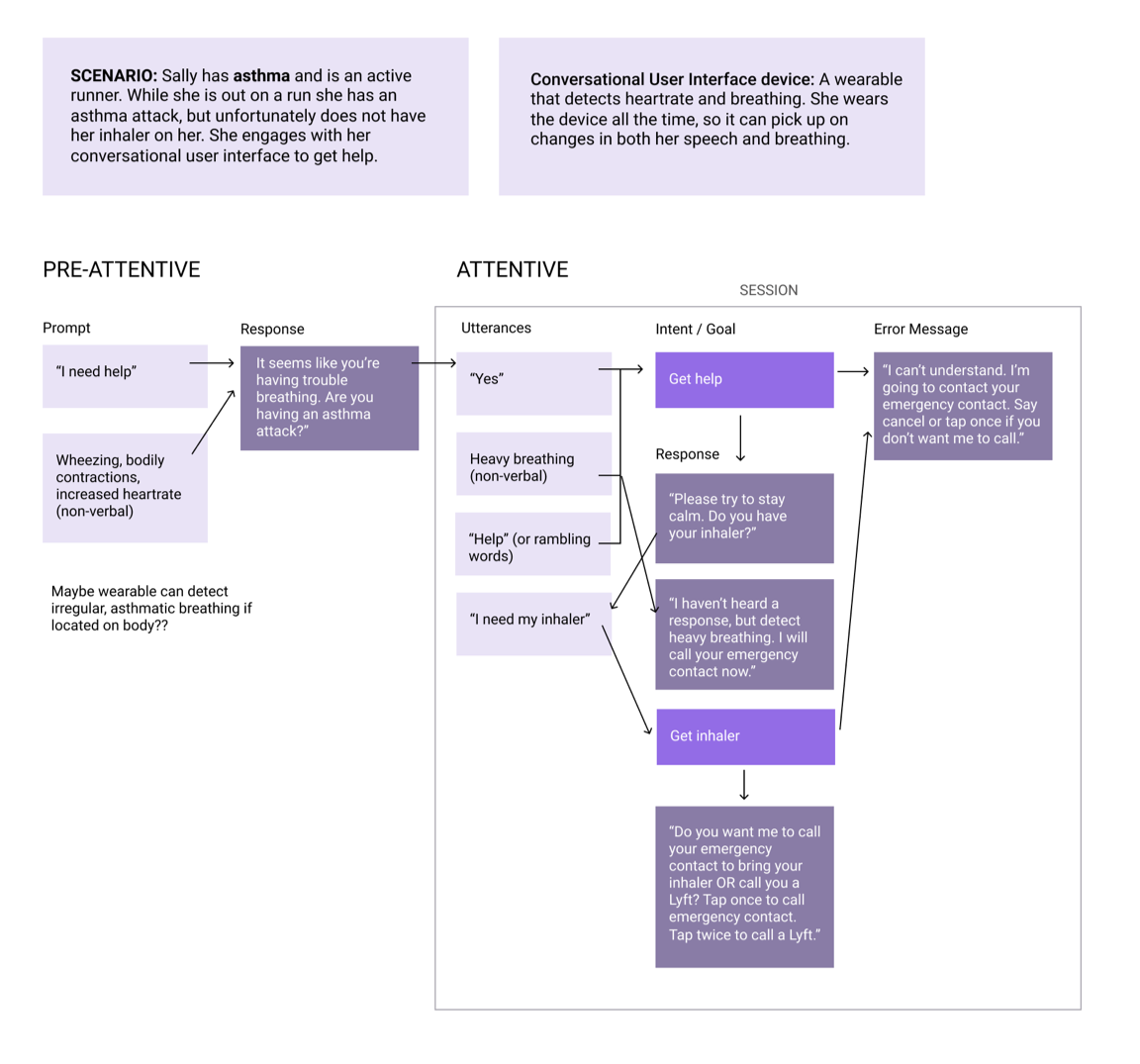 Thus, when designing the conversation flow, we designed two prompts to trigger the CUI: 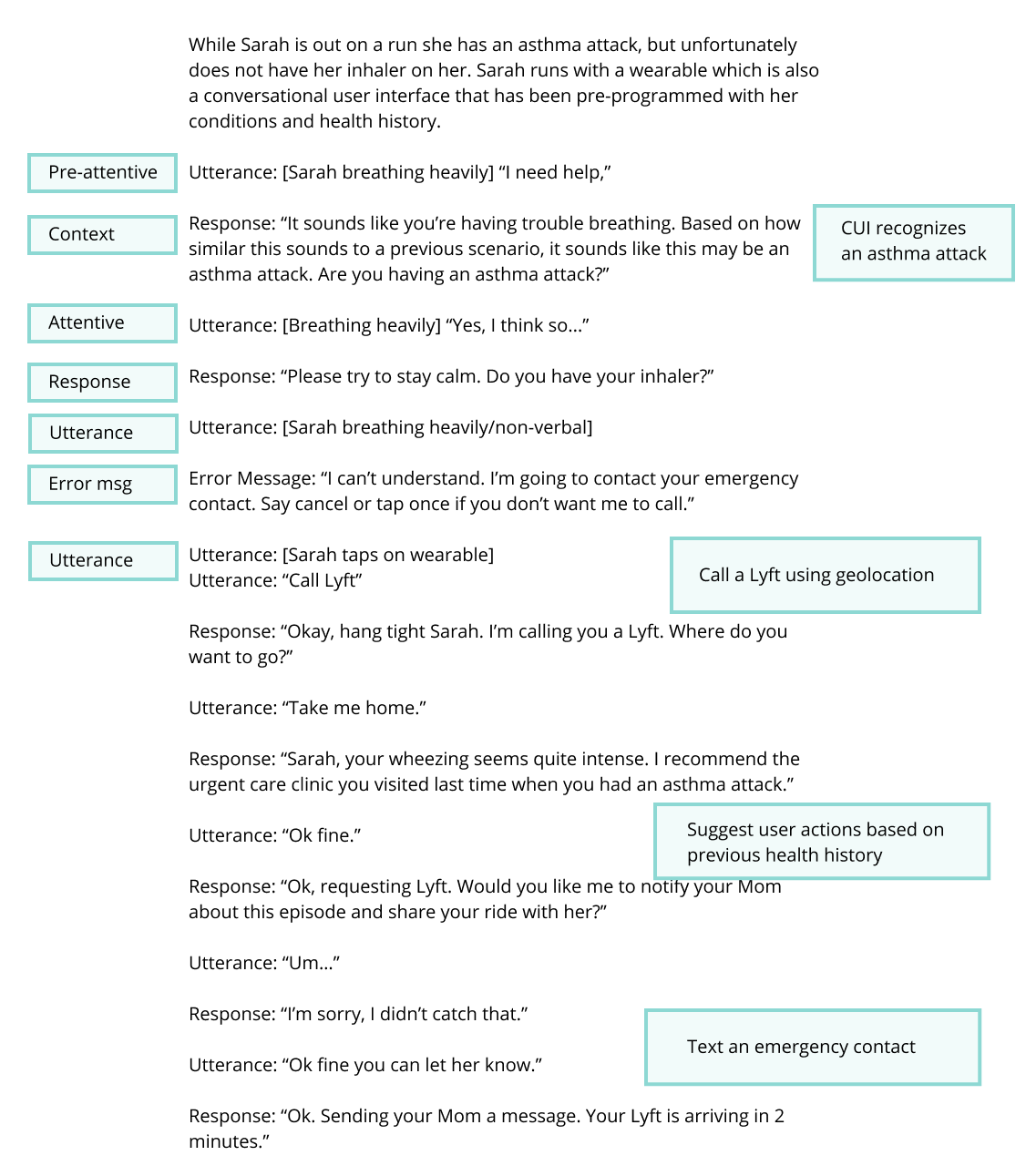 In this iteration of script, we focused on two user needs: 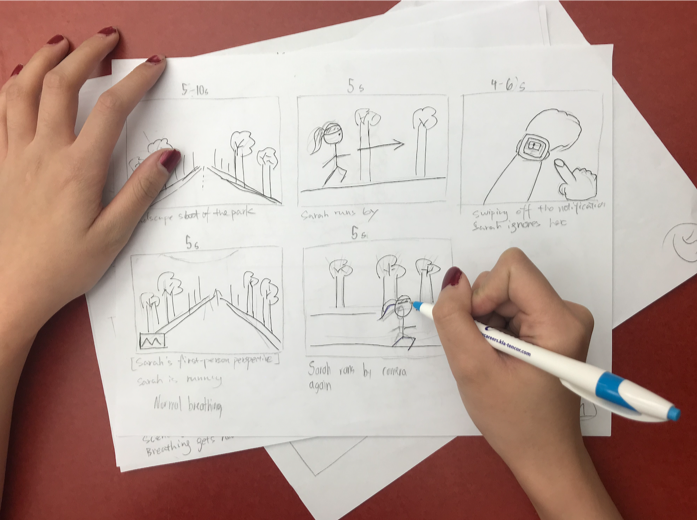 This new version of script was more concise and provides better value. We proceeded to visualize our ideas in storyboards. This was the time we started to think about what form the CUI can take. After discussion, we decided the CUI should be in a wearable that is near mouth and pulse.

We set off the make a rough concept video to illustrate the problem and our solution. After our second iteration of the video, we got detailed feedback in class regarding our script and different aspects of the video that should be changed to better communicate the functionality and value of the CUI.

We decided to make the following changes based on the feedback:
• Update script to be more elegant and less wordy - show more on the screen to supplement.
• Pivoted our wearable format moving from an app that would live on the user’s Apple Watch to being a necklace wearable that would be able to better detect wheezing.

During video making, we added haptic input to Mia in the emergency mode.

How can we benefit users beyond the moment of asthma attack?

As mentioned, our feedback from the second video iteration informed our decision to move towards a wearable necklace with capabilities mentioned in the following graphic.

● Love concrete next steps for Mia.
● Great combination of physical gestures and voice commands.
● CUI takes action on its own which is important for health risk situations.
● Like the idea that Sarah or any other user does not have to wear the necklace all the time.
● Problem space was well framed and explained.

● Mia’s form factor of a necklace may discourage users from wanting to wear it
● Where does the information from health records reside? Privacy concerns?
● Would the transportation services be aware of the user’s asthma attack?
● Good idea to track the inhaler, but how do you know where exactly it is?