Xiangzhu Chen
‹ Back to Projects 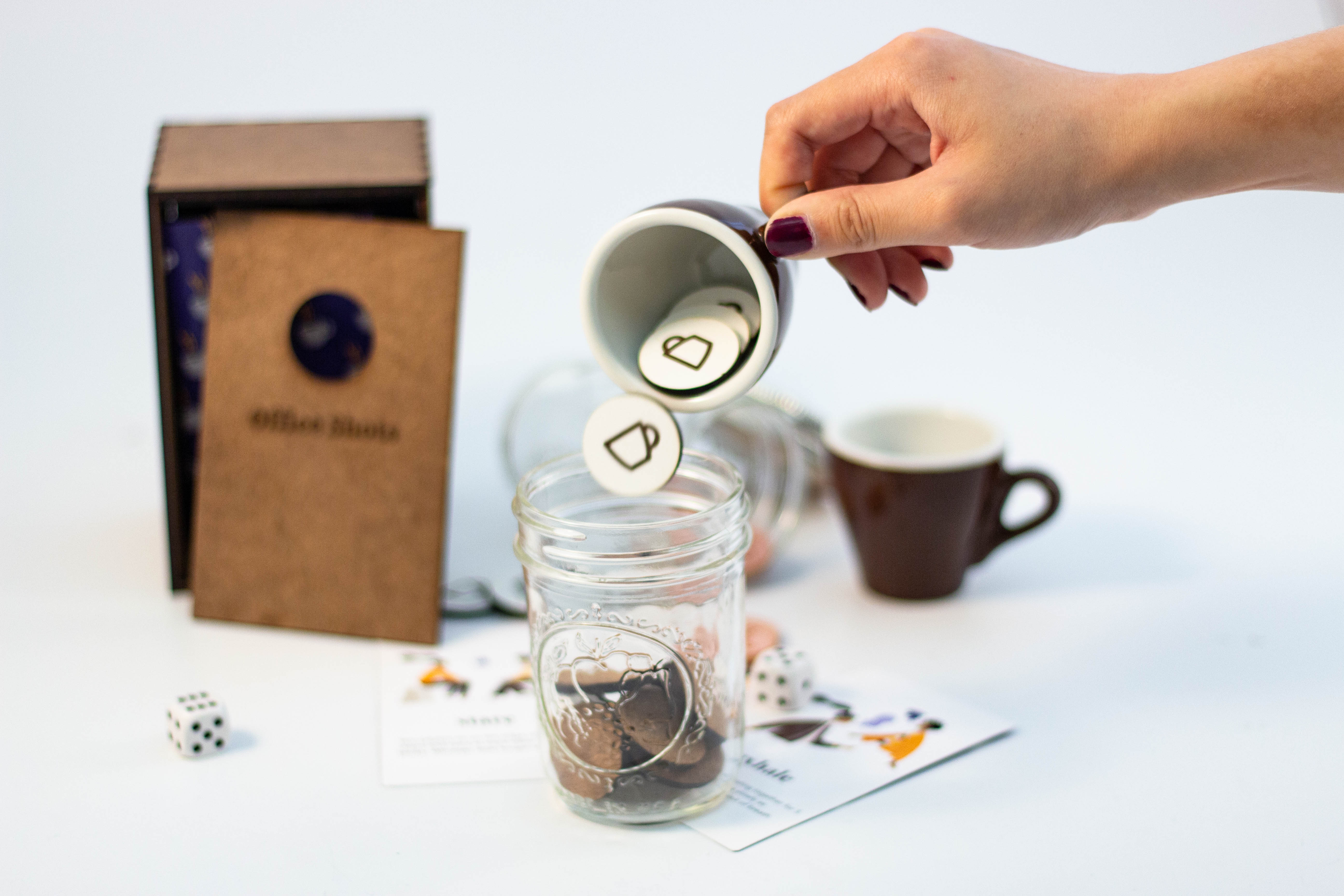 How might we utilize gaming to help people obtain a better sleep, which should not be disturbed? With CMU Oh! Lab, my team designed a physical social game, Office Shots that changed people's coffee-drinking behavior at day, and thus had positive influence on sleep at night.

Gaming is normally seen as an exciting activity. How might we utilize it as a way to help people obtain a better sleep, which should not be disturbed?

In Spring 2019 I joined the Sleepy Games project at Oh! Lab at CMU, and grouped with two other master students to carry out a exploratory transformational game project that aims at changing people's behaviors related to sleep.

In this project, we leveraged both user-centered design methodologies, persuasive design theories, and game design methods. Our team focused on this prompt:

How might we improve the sleep quality of professionals who practice sedentary work through a physical game? 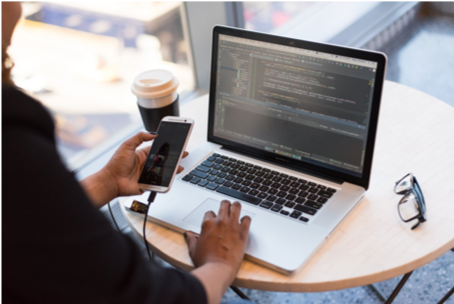 Through research, we identified three major barriers our target group is facing in order to transform to the ideal behaviors, which is consuming the coffee in an amount that powers them through work but not affects their sleep negatively:

To achieve the goals, our team present:

A multiplayer game that focuses on strategizing one’s coffee intake in the workplace. Players can use coffee token and challenge token to get a certain amount of coffee to plan out for a day. The whole session runs 5 days.

In a word, Office Shots helps the players to strategize their coffee intake during the day so that they experience less interrupted sleep at night.

Transformational goals (aka. the ideal behaviors after playing this game): 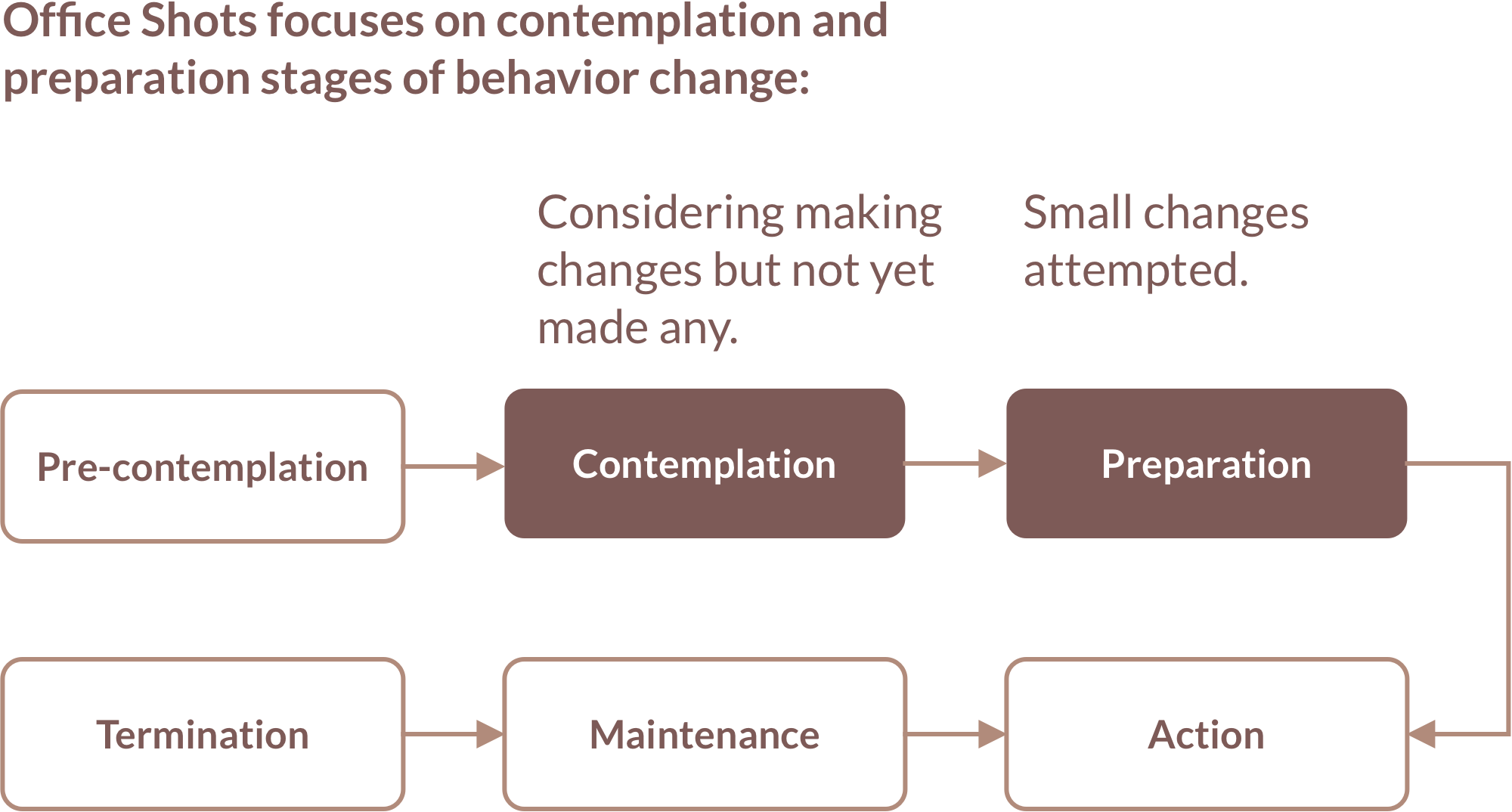 2. Dual Process of Thinking. With office shots, we want to help them really think about how they are consuming coffee currently, what would be a better way to do so, but in a fun and engaging way.

3. Embedded Design theories. The goal of changing sleep behavior is not explicit in the first place. According to the theory, this would make people accept the behavior change more easily.

We were presenting to the client

At first, I wanted to help people feel calm and cozy during the "awake time", however, it's not working.

Listing out potential area to explore helped us to get started: 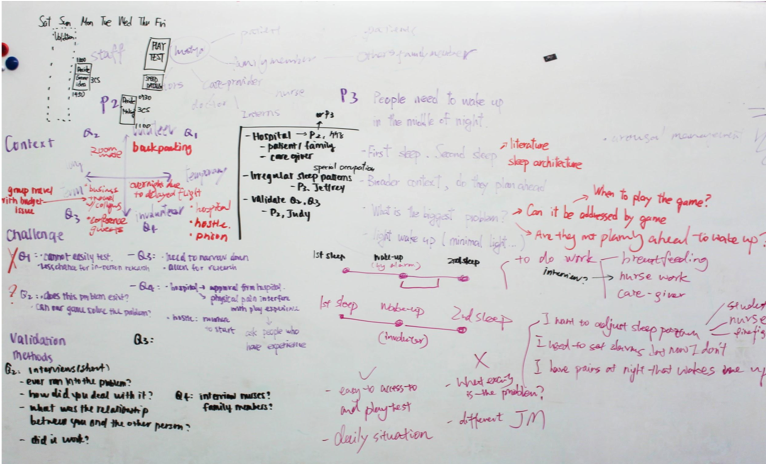 Our team picked interrupted sleep as the starting prompt to explore. We found that the “awake time” between first and second sleep is the major pain point, during which people feel anxious and restless.

We quickly prototyped from sketches to a physical ball prototype with simple game interactions. However, the interactions lack game machinisms that can forge long-term behavior change.

Pivot - what if we look at the time before sleep?

With further research, we found that among the things people usually do before bed, food and beverage consumption influences them a lot, and is an area that has not been explored yet. Coffee is a common beverage that people have every day that is highly related to sleep. Thus, we felt confident to start again with this focus.

As digging deeper into the problem space, we found that Caffeine could take effect to at longest 8 hours.

Coffee drinking is also closely related to social activities, culture, and daily routine. It’s common in workplace where people need to be constantly concentrated on work. 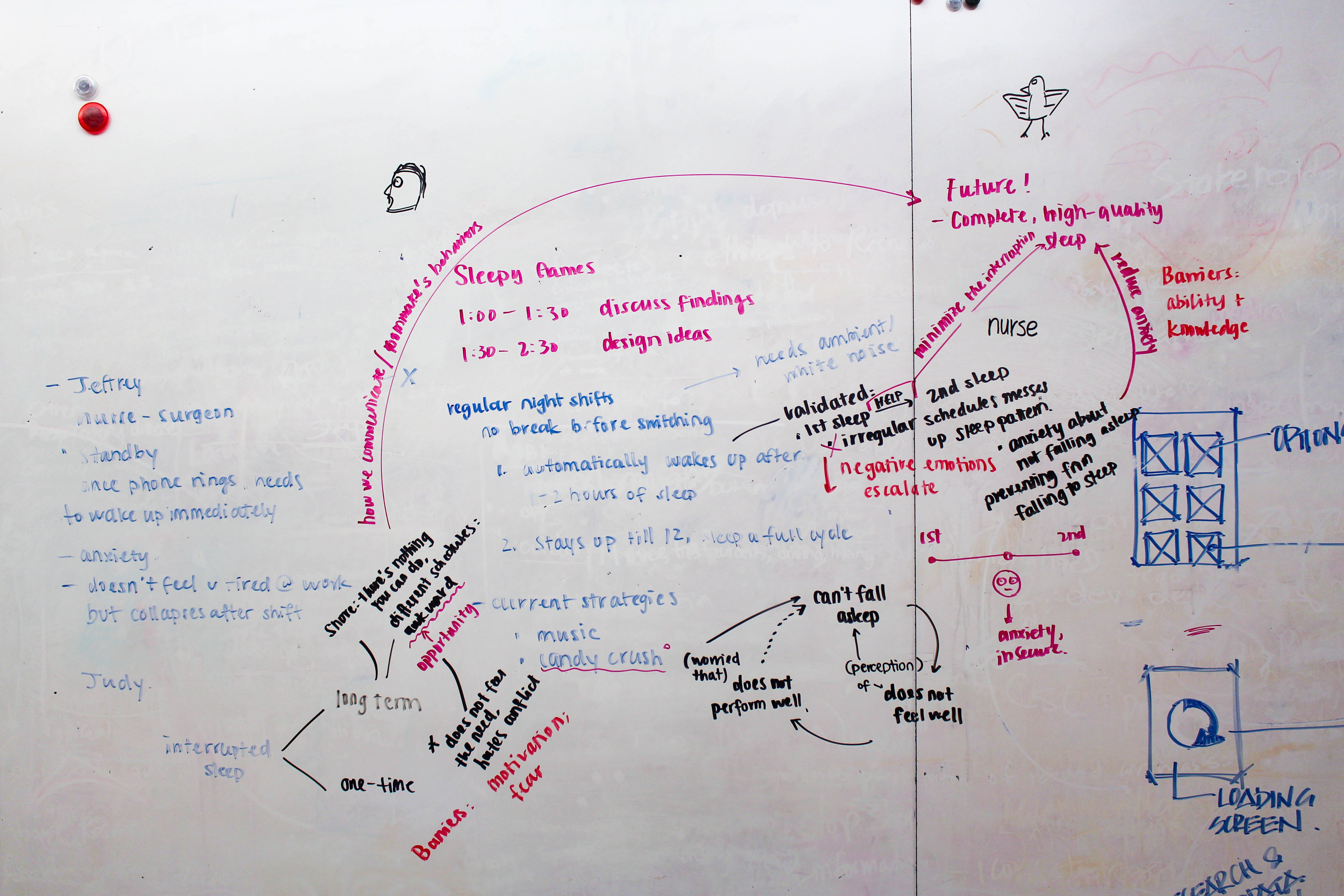 Why are target group over-consuming coffee?

With interviews, we then found that people who practice sedentary works usually over-consume coffee, and tend to sleep very late. We found these barriers they are facing in terms of reaching the ideal coffee drinking behavior:

Being unaware of how exactly coffee affects their energy level, and thus, not knowing how to drink it efficiently.

During work, they keep drinking coffee without paying attention to how much they’ve consumed.

Sedentary works make them only drink coffee to get energized.

Our time was limited: a physical prototype every one or two weeks (plus research).

Limit the amount of coffee by generating competition

We started with one simple goal: to help players reduce coffee consumption because we wanted to avoid withdrawal caused by heavy reliance on coffee. 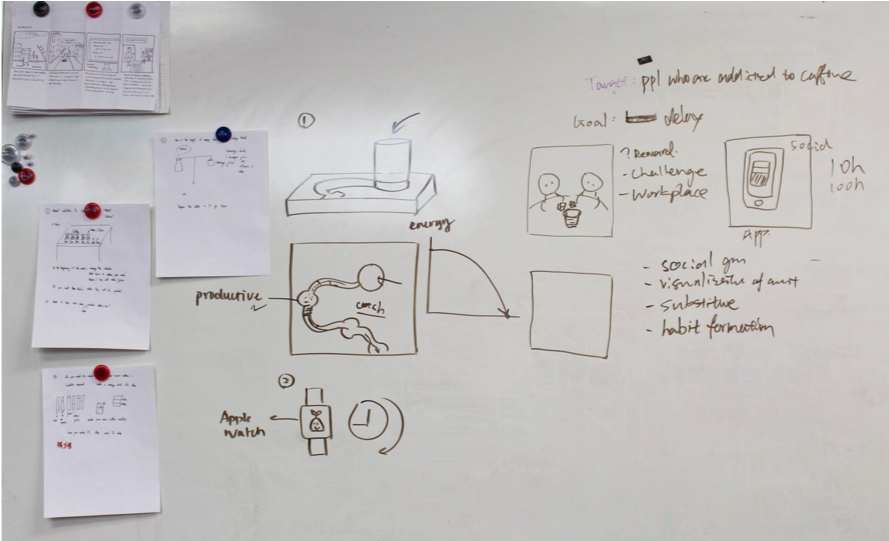 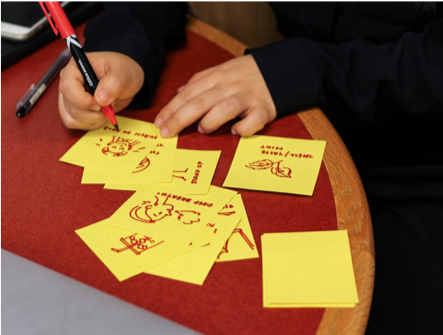 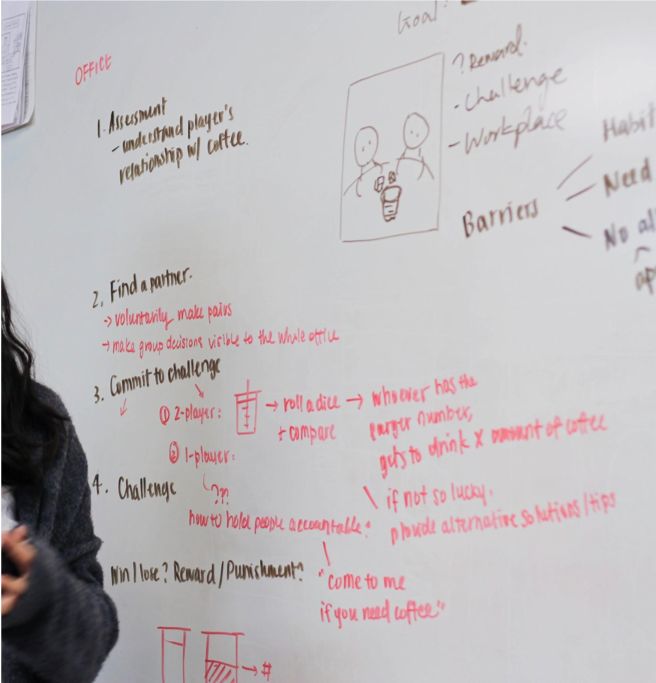 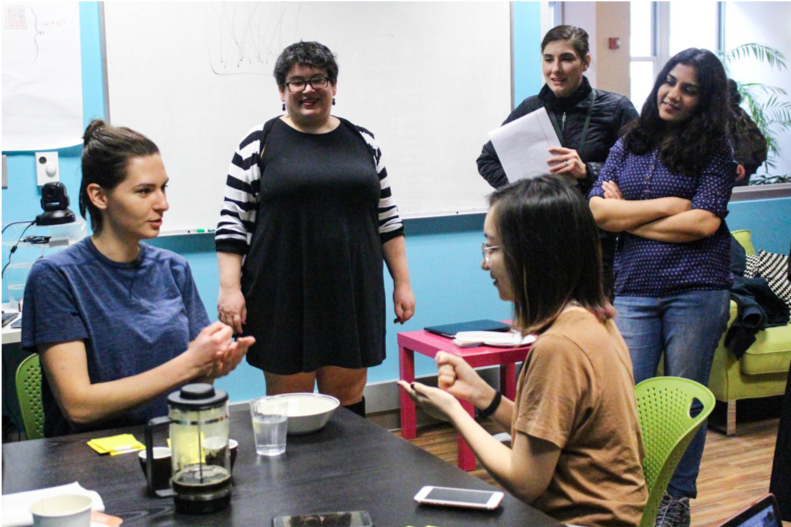 We were doing the first round of playtest at Oh! lab with other peers.

Utilizing the competition as a way to educate....but failed

We thought that we could help players cut down the unnecessary coffee intake by teaching them alternative energizing methods. However we found that those alternatives, like taking a walk or drinking more water, could not provide the energy people need during work. 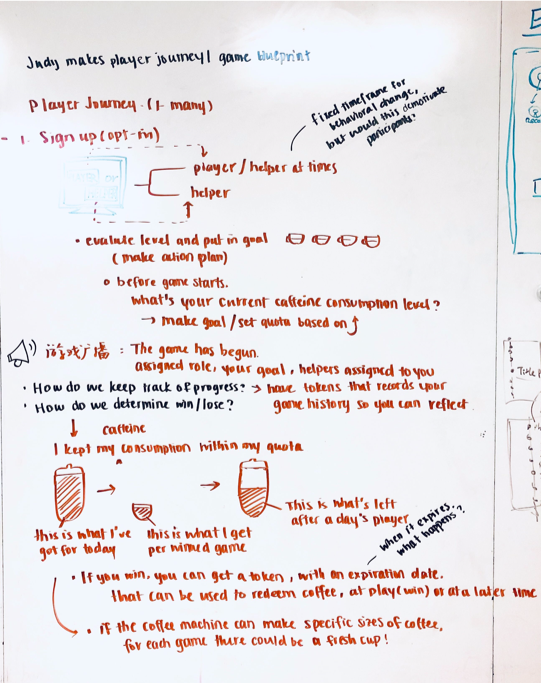 Thus we asked these questions based on playtest feedback to move forward:

What are some other player dynamics?
‍
How to reduce the cognitive load of players and make the game sessions short and crisp?

What is the ideal status of coffee intake?

What happens if buddy did not need coffee after wins?

We experimented with incorporating social aspects into the game and ideated on strategies such as having a public whiteboard to keep track of individual game progress and hold players accountable.

We divided the players into two groups with different game goals: challengers (who are driven to play the games because they want coffee) and gatekeepers (whose responsibility was to“guard” the coffee and help challengers cut down their intake.) A more complete set of rules can be found on the 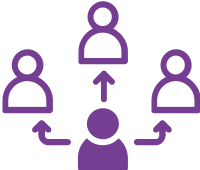 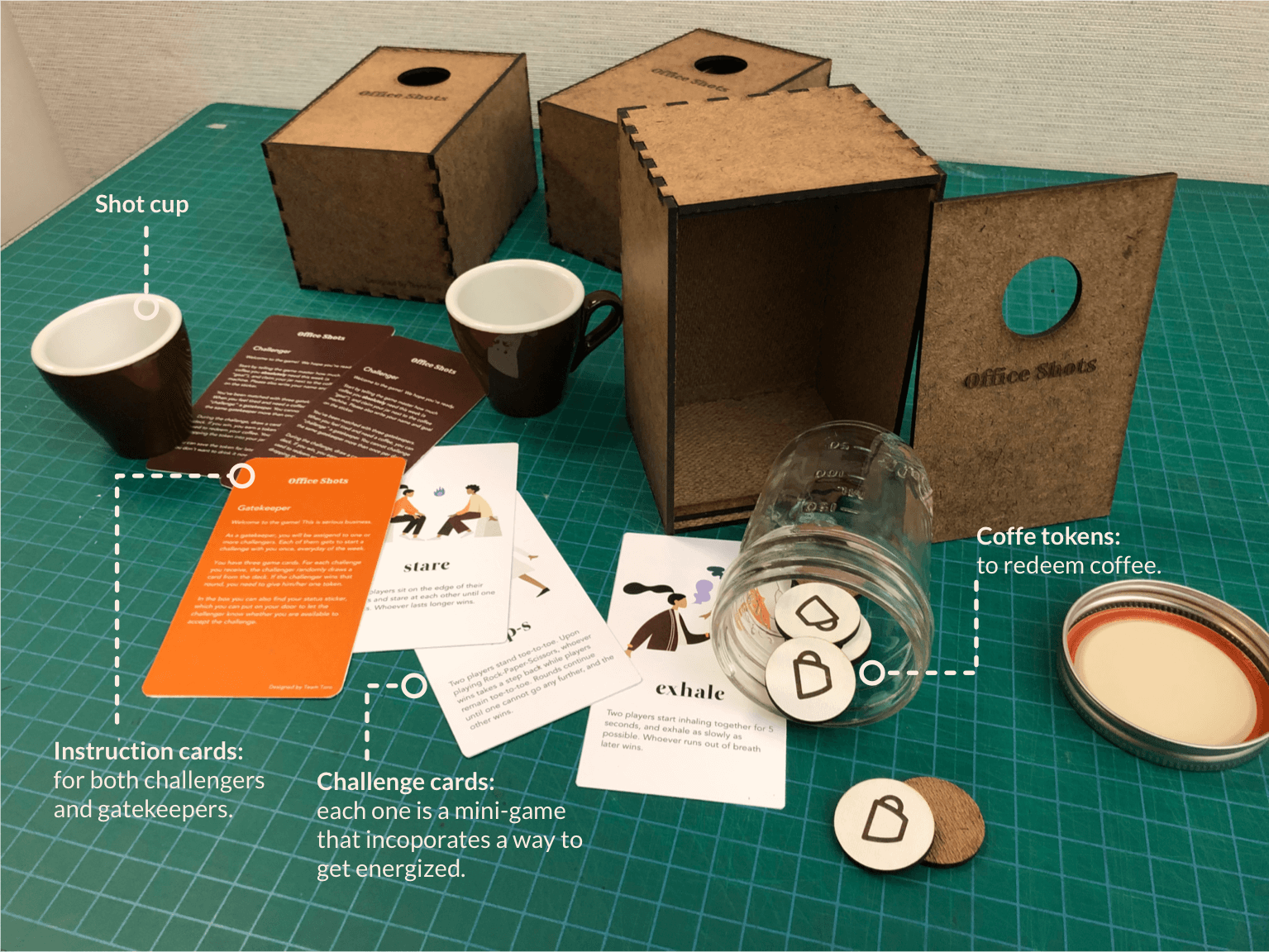 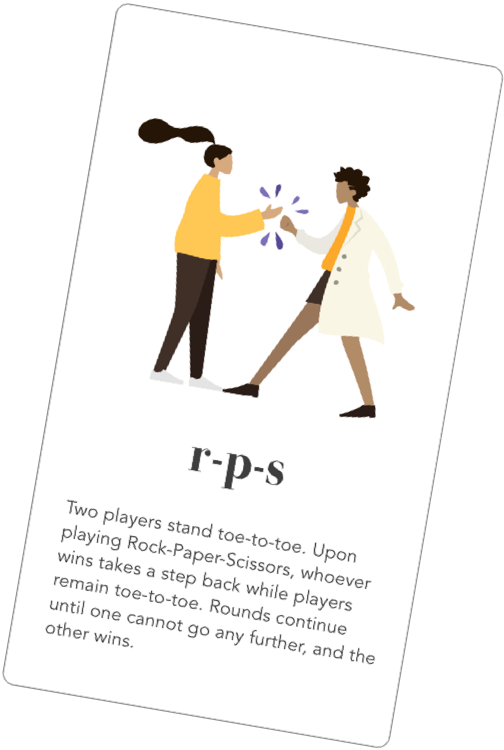 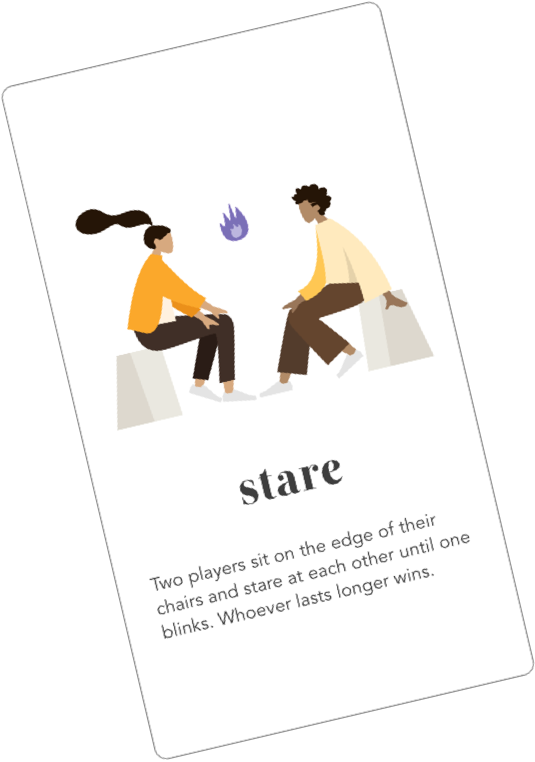 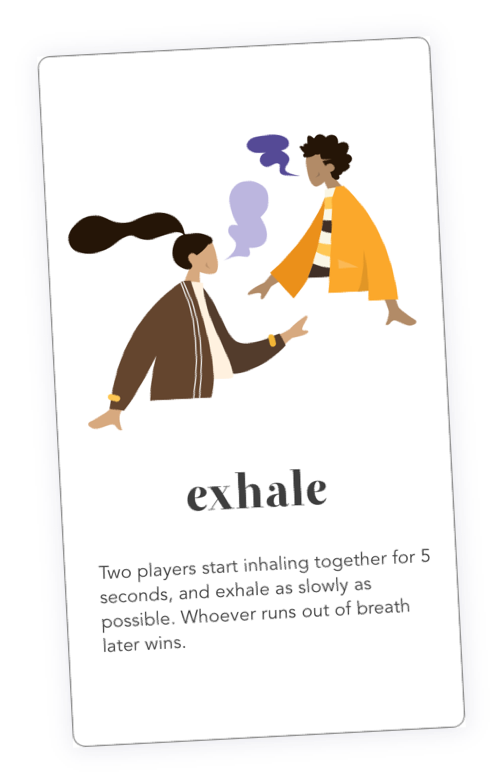 1.Gameplay garnered a lot of attention from passers-by and created conversations. For example, one challenger was in need of coffee so he started a challenge, but drew a card with a game he did not think he was good at; people around were cheering him up, saying “you can do it!”
‍
2.Challengers were always very engaged and tokens were just a means for them to get their coffee. We originally had the assumption that the physicality of the token would add to its perceived value so that challengers would try to keep them, but it seemed that the need for coffee canceled it out.

3.Challengers stayed true to their goals, though it was difficult. Not everyone were motivated to cut down their coffee intake, but once they had declared their goal, they all tried their best to stick to it, proactively looking for alternatives when they were feeling tired.

Pivot 2- Simply cutting the intake amount down is not enough, instead, discovering the optimal pattern is the key to ideal behavior change. 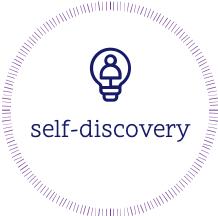 We give our players the freedom to explore and decide on what's best for them. 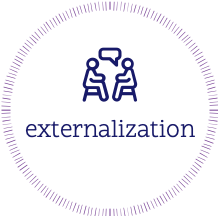 We enable players to externalize their experience and reinforce the reflection on their existing coffee-drinking patterns. 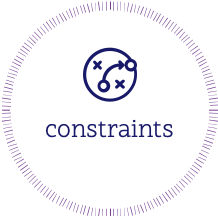 We set up constraints to nudge players to experiment different patterns of coffee drinking. 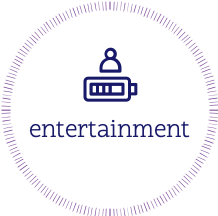 We kept mini-games that can provide temporary energy boost to facilitate social interactions and add fun.

Every one can be the buddy. This solves scheduling issues and allows more game rounds and social interactions. 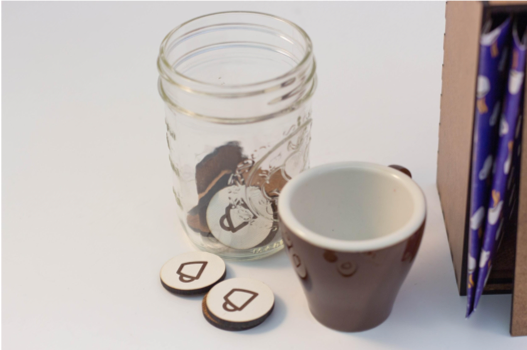 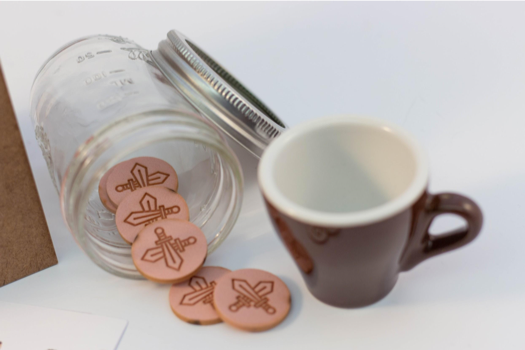 On top of coffee tokens for coffee redeem, we introduced challenge tokens, with which players can initiate mini game sessions to earn more coffee tokens if they win.

We incorporated a number of conversation points and journal mechanism to enable players to externalize their experience and reinforce the reflection on their existing coffee-drinking patterns. 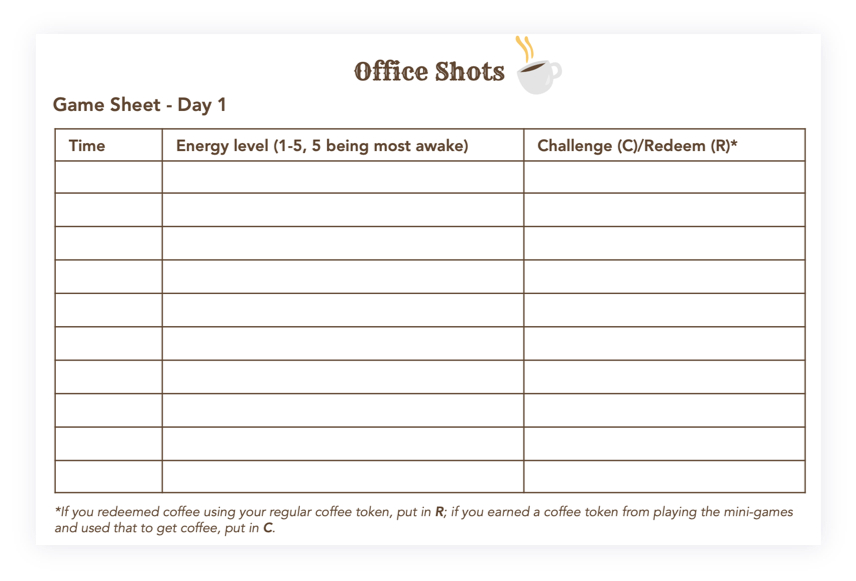 We added a daily setup session, where players come together and decide on the distribution of tokens for that day. We also included a game sheet for players to document their energy levels against coffee consumption. These are intended to help players reflect on their consumption patterns.

We run our 2nd round of 3-day field test at ETC with the faculty there. 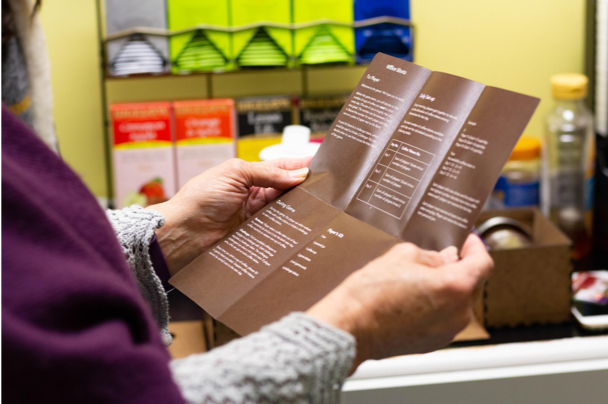 Participant was reading the rule book. 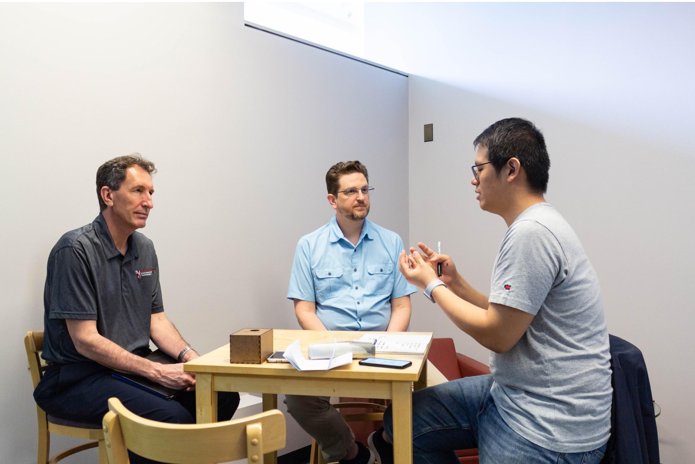 We were doing the follow-up interview. 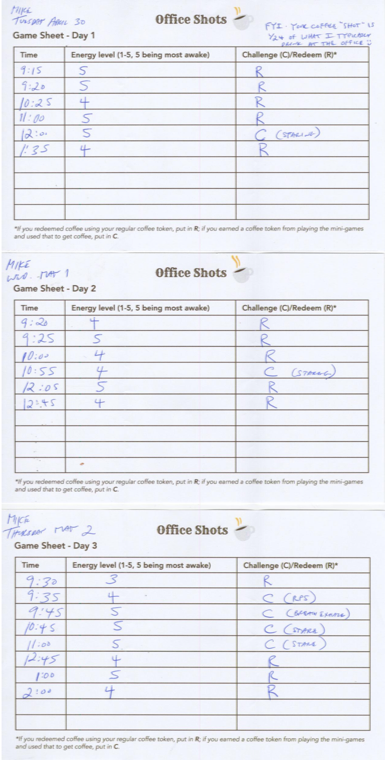 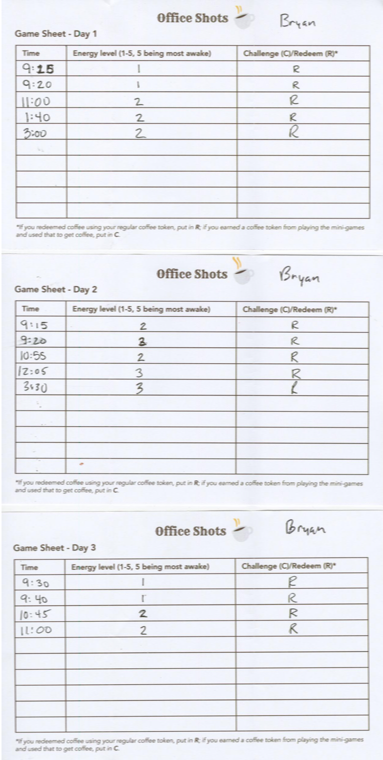 All of the players reported that the game pushed them to try out different coffee consumption patterns and some explicitly pointed out that they strategized across the days of the play test.

Moving ahead, we would love to see if we can implement a multi-session game to help realize the actual behavior change.

Transformation game is powerful and effective. As I mention, all players achieve the goal. We believe that the clear rule of game play helps us make the game effectives. People do not want to fail or break the rule.2.We fail to assess the long term effect on the player due to the scope of the project.
‍
According to transtheoratical model, we put player into contemplation stage. Help player imagine and experience what the life could be if they do it differently. Player might not capable to change the behavior yet.3.Our game successfully make player aware their coffee drinking and energy level pattern. The behavior change might be unpredictable. But player do find something in himself that he usually not aware of.